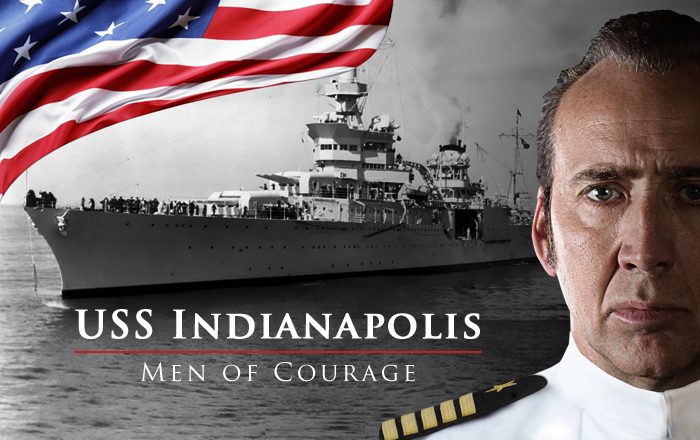 There are movies that make you believe everything they picture. Such films usually make you cry because of the realism of the tragedy you see develop on your eyes. “Pearl HarborвЂќ, “TitanicвЂќ, “Saving Private Ryan”– all of these films fascinate by how realistically they unveil true stories of life in such a breathtaking manner. Neither of these films has its main purpose to simply accurately depict specific historical events as they happened; they are rather narrative films telling the stories of individuals, relationships, love, friendship, betrayal and those things that are important for each and every one of us.

As you start watching “USS Indianapolis: Men of CourageвЂќ, you will notice the “based on true story”sign in the very beginning of the movie which means the film was created on real historical events. Nevertheless, the historical events that happened with USS Indianapolis and the atomic bomb serve only a background to life stories of individuals that appear to be central in the movie.

It all begins with the Portland-class cruiser USS Indianapolis receiving a very important task – to transport the cargo no one from the crew knows nothing of. The cargo was nothing but the parts of the atomic bomb which was soon to level Hiroshima taking thousands of innocent lives. No one, except from the captain who is experienced enough to understand what kind of cargo there were to deliver. Having no escort group, the way back turned out to be much shorter than expected – the cruiser was torpedoed and within several minutes sunk by a Japanese submarine. Over 900 of crewmen were left to the Pacific Ocean having no provision. No SOS signals sent before the ship began to sink were neither accepted nor taken into consideration leaving people between life and death for four days out in the ocean. That’s where the characters start to unveil in a marvelous way. Someone from the crew can see the beloved girlfriend in hallucinations, someone desperately wants to survive to see the newborn son…. At the same time as people are struggling with cruel reality and fighting for their lives, the sharks are swarming around trying to end the sufferings of crewmen. The situations like this reveal true persons’ characters. That’s when you decide whether you try to save a friend’s life or think about saving yourself first.

Great play by actors and dismal music written by Laurent Eyquem altogether make the U.S.S. Indianapolis Movie a truly breathtaking film. Apart from the death and life theme, the movie also talks a lot about love. Nicolas Cage gave his absolutely best to play Captain Charles McVay and he did a fantastic job on that one. Definitely one of the best Nicolas Cage movies so far. But he wasn’t the only interesting character in the movie. Tom Sizemore may not have a very significant role in the film but he was very convincing to show the inner life of his character.

Not many people are familiar with the works of Mario van Peebles who managed to create very dynamic and emotional film where struggle to survive and true emotions that go along with that become the key focus of the movie. The U.S.S. Indianapolis movie does an amazing job at showing how people go insane, lose the grip on reality, die, cry, suffer and still continue to fight for their lives despite all the odds. This movie directed by Mario van Peebles (his third one) has two trump cards. The first one is the performer of the lead role – Nicolas Cage. This movie has become one of the best and dramatic plays of the actor during the recent years. He comes as a very courageous and humane hero who is trying to do everything he can to save his crewmen. Those who watched the movie would probably remember his “Save my boys!”phrase as he was offered a saving place. Nicolas played a very strong character who has gone through many things in life, including the death of his fellow men, all kinds of disrespect and injustice but despite all of these things he was overcoming all of the hardships with great determination and strong will. This is definitely one of the best Nicolas Cage movies during the last couple of years.

The second trump card was the fascinating stories of many individuals, not just one character. The movie is all about about common men who served their country with great commitment by obeying orders they received. They did it together and they were ready to take any consequences that came with that together. These people were united not just by the ship which was the only shelter for many months of war, not just by the ocean that always was equally violent both to officers and low-rank sailors but also by the will to live.

The meeting of two captains вЂ” captain Charles McVay and captain Mochitsura Hashimoto who were the enemies each serving their country вЂ” is probably the best scene of the entire movie. It is hardly possible to watch the scene without tearing up. Great actor play which can make everybody feel the pain of these two people.

The the sinking ship Indianapolis has become the last big american cruiser destroyed during the years of World War II. It has also become the first victim of the atomic bomb. A story like that deserves to be remembered today. The movie is a very dramatic picture and it is definitely the one worth watching.