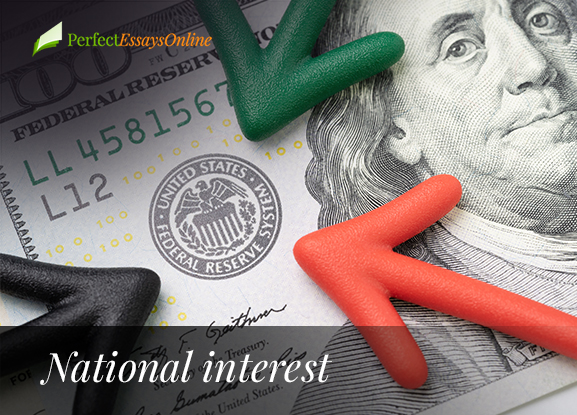 National interest of any country is represented by the overall ambition and goals of the country, including economic, social and cultural aspects. In the phenomenon of international relations, a country’s interest forms the basis of policies in the realist school. As long as the most crucial aspect is the survival and security, in modern times, the preservation of culture is of outmost importance.

The US being among the leading nations at the present time has responsibilities such as global leadership. In this role, the US is burdened with the task of maintaining peace worldwide. Among those posing threats to global peace are the terrorists who stage their attacks on the American nation abroad. The research and development of nuclear technology is regulated by the UN with the support of the US. This technology if handled wrongly could cause adverse global effects; countries such as Iran should have their plants monitored to avert a global crisis.

The survival of the country in the event of a crisis is also a considerable national interest. The country should be able to defend itself and counter the attacks made by adversaries. In the information age, organizations like the CIA and FBI should streamline their operations in order to be able to collect the information prior to an attack.

Another concern is the immigration from the borders. This, if unregulated, could cause more harm than good (from the cultural diversity to labor). The immigrants in most cases deal in drugs such as cocaine and heroin, and impact the national welfare negatively. The importation of drugs and human trafficking can be monitored and abolished if the borders are safe.

The political structure in the US is a model likely to be adopted in many developing countries. To maintain the integrity of such a model requires stringent laws which may regulate those in power. The morality of an individual seeking a public office is put in the limelight, and one should be careful of their actions and words. Such rigorous vetting ensures a stable country with strong leaders ultimately leading the country into the new age.

If you actually need some help in Term Paper Writing , you are at the right place!