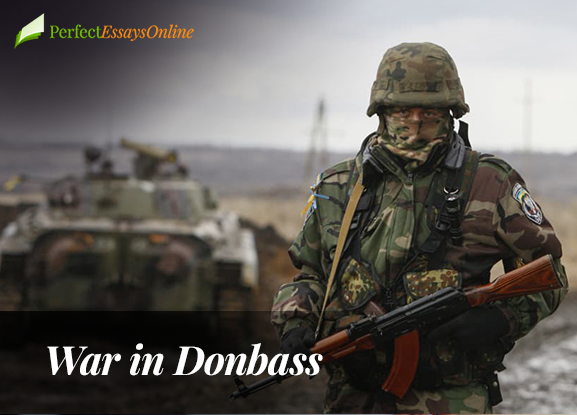 The fighting in the Donbas began on April 12, 2014, with the capture of Ukrainian cities Slavyansk, Kramatorsk, and Druzhkovka, where the Russian saboteurs seized the arms of the Ministry of Internal Affairs by arming the local collaborators and assimilated to their ranks. In the conditions of non-opposition of local power structures of Ukraine and even open cooperation, small assault squads of Russian saboteurs took control of Horlivka and other cities of Donetsk and Luhansk regions in the following days. On April 13, 2014, in response to the invasion of sabotage units, acting President of Ukraine Oleksandr Turchynov announced the beginning of the Anti-Terrorist Operation. Special Forces, subdivided into Slavyansk and Kramatorsk regions, took the first fight in the morning on April 13 in Semyonovka, Slaviansk suburbs, having fallen into the ambush of pro-Russian militants, which killed the captain of the SBU Alfa.

The Course of the Donbass War

After a series of large unsuccessful battles in early May 2014 under Slaviansk, where the Ukrainian forces lost 2 Mi-24 combat helicopters from the fire of Russian MANPADS, as well as several ambushes, the ATO leadership decided to gradually surround Slaviansk by cutting off the garrison of pro-Russian militants from the supply of weapons from Russia. On May 11, 2014, “pro-Russian” referenda were held on the territory of some districts of Donetsk and Luhansk, which raised the issue of supporting the state independence of the “sovereign” DPR and LPR proclaimed in April. According to the organizers of the “referenda,” the issue was supported by voters, and according to independent witnesses, “referenda” had all signs of fictitiousness.

On June 1, 2014, pro-Russian militants launched a several-day assault on the border guard in Luhansk, which ended on June 4 with the exit of the Ukrainian garrison from the border guard. On June 2, 2014, near the headquarters of pro-Russian militants stationed in the Luhansk Regional Administration, there was a series of explosions, which also killed civilians. On June 12 the delivery of heavy armored vehicles from Russia was begun: a column of tanks arrived and went through Luhansk, which was first used the next time in the war on the Donbass, June 13 Russian militants fired a Ukrainian checkpoint under Dobropillya.

The War in Ukraine Today

On June 20, 2014, the newly elected President of Ukraine Petro Poroshenko announced the beginning of a ten-day unilateral ceasefire by promising an amnesty and exemption from prosecution for all who make weapons, creating joint units of the Ministry of Internal Affairs to ensure public order, decentralization, coordination of heads of regional administrations with representatives of the Donbas, local and parliamentary elections. Pro-Russian militants did not approve of the proposed conditions and did not support the ceasefire.
After ten days of a unilateral ceasefire, the Ukrainian forces completed the Slavic encirclement, forcing the group of Russian militants to retreat to Donetsk on July 5. ATO (Russia Ukraine war) headquarters began a large-scale operation to establish control over the Russian-Ukrainian border, creating, through the forces of several brigades, a 15-kilometer zone along the border controlled by the Armed Forces of Ukraine and territorial defense battalions. At the same time, the Ukrainian forces began a deal on the decommissioning of the Luhansk region.

On July 11, 2014, against the background of the threat of full blocking of the border by the Ukrainian forces, Russian regular troops began participating in the war, inflicting a destructive rocket strike on Ukrainian territory under the Zelenopillya, a village several kilometers from the Russian-Ukrainian border. Since then, the entire line of Ukrainian formations near the border – from Luhansk region to the Azov Sea coast – during July-August 2014 was under systematic artillery shelling from the territory of Russia, to which Ukrainian formations did not meet. As of today, the war in the east of Ukraine continues.

Our professional team of writers will provide customers with Premium Essay Help !