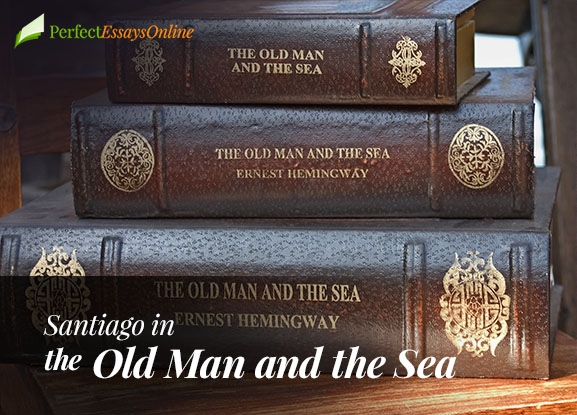 The Old Man and the Sea is a story about an old man, who struggles with life as a fisherman. Santiago is an old man, with a mix of good and bad luck in his career at sea. The story brings out a concept of honor, showing his strong spirit and resilience despite the difficult times. According to Hemingway, “But man is not made for defeatвЂќ, he said, “A man can be destroyed but not defeatedвЂќ (43). From this statement, it can be stated that Santiago is a hero in this story given his strength and courage in the face of adversity. He understands the dangers of his life as an old and lonely fisherman, but this does not stop him from earning a living. His heroism can be understood in the context of his actions in times of trouble while at sea. Based on the book, Santiago is a here in a number of ways.

Santiago is an old and very seasoned Cuban fisherman, who loves the sea and all its troubles, as well as triumphs. In the story, he refers to the sea as “la mar”(8), which implies a feminine character that is considered with a lot of affection. Hemingway says, “Why do old men wake so early? Is it to have one longer day?вЂќ (24). In this quote the author was emphasizing the man’s love for the sea. This love keeps him believing that he would get fish even after 84 days of getting nothing. Knowing that he depended on the sea for his sustenance, it is important to note that Santiago has had to persevere quite a lot during these 84 days from being laughed at by the fishermen in the lucky boats, to having his loyal friend and companion, Manolin, sent to another lucky boat due to their unlucky streak, and then having to endure the long fishing trips alone with only his thoughts and voice for company.

On the 85th day, he goes out far and finds a school of dolphins, which, however, escape him due to their fast speed and his slow boat. Later in the day, however, he runs into another school of fish and manages to hook the largest marlin of them all. This moment shows his perseverance paying off in a spectacular way; although, it is only the beginning of yet another struggle. The first challenge was keeping up with the catch. At first he wants to let the fish go, noticing that it may be a shark and that he is old and alone; thus, relatively unable to pull it in. Hemingway says, “It could have been a marlin or a broadbill or a shark. I never felt him. I had to get rid of him too fast”(14). He also adds, “Let him think that I am more man than I am and I will be so”(36). These moments bring out his wisdom, his ability to contemplate a situation and be honest about the circumstances. He even decides to let the fish go, although he does not succeed when the line moves suddenly, catching him unaware and even hurting him right under the eye. At this point, the wise fisherman decides to stay with the fish until the end. This was evident when Hemingway said, “Fish,”he said softly, aloud, “I’ll stay with you until I am dead”(14).

Another heroic moment with respect to this old fisherman is when he stays with the fish, enduring the heat, hunger, and fatigue for three days in order to let it tire enough for him to hurl it on to the boat. He knows the dangers of doing this as the marlin’s blood is likely to attract predators in the sea world. He goes about it, nevertheless, showing courage in the face of adversity. Considering that he is old and alone and has been out into the sea for over three days, Santiago should have at least shown some concern about being attacked by the predators, but he focuses on getting to the shore. This goal keeps him strong and committed, up until he accomplishes it. The sharks end up in defeat considering the resilience and motivation of one tired and starving old man.

The way he concedes to the sharks is also heroic in that he is able to identify when he cannot win against the predators. Not only out in the sea, but also in general, as is with life. He is able to accept his dependence on the sea, and lives a deluded life with respect to his loneliness and destitution in terms of lacking even the most basic of items, such as food and decent beddings. He talks to Manolin about the things that he does not have, and even removes his wife’s picture from the wall, just so he could forget about her. This was evident when he said, “There was no cast net and the boy remembered when they had sold it. But they went through this fiction every day. There was no pot of yellow rice and fish and the boy knew this too”(4).

The old man goes about life in a way that suits him, he does not dwell on the difficulties that he experiences, but rather focuses on the little triumphs that the sea brings him. Ordinarily, people give up when things become too tough. The fact that everyone else comes back with fish, while he comes back with nothing for 84 consecutive days should be enough to break his spirit, but he draws strength from the idea that he had been through worse with the 87 days previously endured. It is impressive just how indomitable the old man is, considering his age and circumstances.

In the story, Hemingway says, “If the others heard me talking out loud they would think that I am crazy. But since I am not, I do not care”(62). He also says, “Have faith in the Yankees my son. Think of the great DiMaggio”(78). In this case, Santiago is seen as the rational thinker, who considers life as it is. He, however, chooses the bits and pieces of the truth that actually help his situation, and in this way he is seen managing quite well on his own. Other fishermen have their ways, with different beliefs and practices with respect to their trade. Nevertheless, according to Baker, “Santiago is unique and very lovable judging from how Manolin treats him”(89). The young boy had been able to learn quite a lot from the old man, and he owed all that he knew about fishing to his old and wise head and hands. Baker argues, “The ability and willingness to instruct the young boy in the ways of the sea also shows strength of character in SantiagoвЂќ. He not only passes on his wisdom to a younger individual, but also passes on the love for the sea and the fish. This is evident when Hemmingway wrote, “My big fish must be somewhere”(73). Unlike other fishermen, these two fishing companions share so much in terms of the fishing traditions. Other fishermen simply teach their apprentices how to fish, but Santiago goes beyond the fishing into passion. In comparing Santiago’s bravado, Fitzgerald wrote, “This is quite heroic in the context of passing on the special skills”(26). This confirms that, indeed, Santiago was a man of many talents.

The story of the Old Man and the Sea presents a case of an individual, who has a great relationship with the sea and his apprentice. Santiago is a hero in the context of his actions both while out fishing and while with Manolin after their fishing expeditions. His actions with the marlin and the battle against the sharks bring out his heroism given that he is able to fight fairly and concede defeat where necessary. He ends up taking nothing to shore after struggling with a lot of sea predators, but he is lauded for having caught the marlin, at the end presumed by the tourists to be a shark. Considering him as a hero is, thus, justifiable with respect to his personality and strength, he continues to show such resilience throughout the story and he even stands out as an individual.

Our Top Quality Writing Service will eagerly help you reach your academic goals!